Mother Mariana de Jesus, the Conceptionist Convent, Quito: The Church, The World, The Apostasy, The EVENT 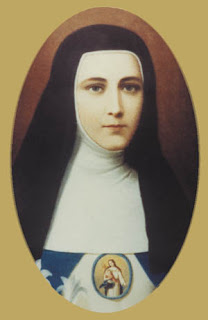 I believe it to be absolutely essential that we understand the coherent message that Our Dear Blessed Mother has given us at Quito and that she reiterated at Fatima. YES! The message of Quito is linked directly to that of Fatima and to others.

The life of Mother Mariana de Jesus Torres is a type of the Church, an allegory that foreshadows our current crisis, a prophecy in flesh and blood. Further, her convent of The Immaculate Conception of Quito represents the Church during this Apostasy and the Ecuador represents the world. I will flesh this out shortly. But, it must be understood that all of the events that happened to Mother Mariana, the Convent, the apparitions, the imprisonments, the departure of the Franciscans as the Directors of the Convent, the statue of Our Lady and the Child Jesus that was made by Angels, the extinguishing of the Sanctuary lamp, and many, many other events and situations tell us about this time in which we are struggling and explain it. As I flesh this out, I hope it will become clear that Our Lady came to Fatima to tell us that this terrible chastisement that she warned us about in the 1700s would happen in the middle of the XX Century was almost upon us and to ask us all to do what she had asked of Mother Mariana and her fellow Founding Mothers: expiate the crimes of the world in imitation of Christ. Did not Our Lady ask US  at Fatima to Pray the Rosary, make sacrifices, do you daily duty? If we did not, Russia would spread her errors throughout the world. Did we obey Our Lady? Look around you!

To begin with, Mother Mariana was born in the Basque Province of Spain, situated in the heart of the region between La Salette, Fatima and Lourdes. This is the same region where St. Ignatius Loyola was born, where the Reconquista of Spain from the Moors began at Covadonga, aided by Our Lady of Covadonga. This cannot have been a coincidence. At the age of nine years, she traveled to Ecuador with her aunt and a group of Nuns of the Immaculate Conception to found a convent in Quito, a city whose name in English means I take away / I remove.

Here is a section from the biography during one of the times that Mother Mariana and the Observant sisters were in the prison. It is entitled Our Lady Puts Out the Sanctuary Lamp:

My daughter, thus will the spirit of my daughters be put out in all of the centuries until the the government of the Friars Minors is restored because I will always have ungrateful daughters, contrary to the Seraphic Family - some, due to inexperience, others, induced and other due to malice. But I will also have holy daughters who, loving my Immaculate Conception, will love my servant Francis and will be very firm pillars who will conserve the Monastery in the same place where it was founded, in the heart of the city, in order to placate the Divine Justice for the crimes which are committed therein. The infernal serpent will want to destroy this Monastery, using people respected in knowledge and virtue; but I will not permit it because in all the ages I will have innocent, penitent, selfless daughters who keep the rule, who attract the gaze of God and of His Immaculate Mother and will be known only to God.

Oh, how many mysteries were known in that dark prison in which the victim Conceptionists suffered a sea of torments!

In the morning, when they went to Holy Mass, they saw the Sanctuary Lamp had gone out. But despite the many people inside and outside of the convent who attempted to light it, they failed to light it. In vain did they change the lamp, the oil, the wick, they could not do it. On the second day, the lamp lit on its own, doubtless due to the morning sacrifice of the captive victims which brought down the Mercy of the Lord upon this monastery. (p. 131)

On another occasion, while in adoration before the Blessed Sacrament, Mother Mariana heard frightening, thunderous sounds that seemed to shake the very mortar of the walls. She was terrified and asked Our Lord what the noise meant. She heard the voice of Our Lord coming from the Tabernacle:

My daughter, what you hear spiritually is what your successors will suffer materially, as the time will come in which the demons will want to demolish this Monastery and will exert every effort to put an end to this place; but they will not achieve it while the spirit of sacrifice exists. For that reason, it is necessary that there be victims within the Monastery... (p. 113)


Finally, while in prison another time, Our Lady came to console Mother Mariana:

The tribulation with which my Most Holy Son is proving you today is a heavenly gift. with which souls can fortify themselves and contain the divine wrath soon to unleash a tremendous punishment upon the ungrateful Colony (Ecuador). How many secret crimes are committed in its cities and towns! Precisely for this reason was the Convent founded in this place, with the purpose that the God of Heaven and Earth be appeased in the same place where He is insulted and ignored and for this reason the demon, enemy of God and of the just, both now and in the ages to come, will put into play all of his malicious cunning to put an end to this Convent, my Foundation and my own inheritance, using people of authority and dignity under the pretext of improving the situation and tranquility... In all the ages, I will live here manifested in some of my dear daughters, here, in the midst of the noise of the ungrateful world, God will have a few contemplatives and Souses worthy of His Majesty, who, in silence, hidden, in humiliation and despised will be in the very bosom of the Community; they will be powerful in placating the Divine Justice and in obtaining great good for the Church, the Country, and for souls. Without them, Quito would not survive.


See then, how the prayers, sacrifices and fulfilment of their daily duty placated the wrath of God, so justly inflamed against the world. If you had to summarise the message of Our Lady at Fatima, what would it be? What did Our Lady ask of us? Would it not be that we should pray, do our daily duty and make sacrifices? What would happen if we failed to do these things? Many souls would be lost, the Holy Father would have much to suffer, Russia would spread her errors throughout the world, various nations would be annihilated. The same relationship exists between the Conceptionist convent and Ecuador as exists between the Church and the World. Our Lady asked us at Fatima to do the same things she asked the Nuns in Quito to do and for the same reasons.

What would be the result if Our Lady's requests were not fulfilled? In Quito, she plainly said that Ecuador, the Colony, would not survive. At Fatima, she gave Lucia the third secret. We have all seen many guesses put forward about the contents of the third secret. Nobody knows for sure exactly what it contains. However, in hindsight, most of those reading this have a good idea. I believe that the events at the Monastery in Quito give a clear indication of what the secret contains. Multiple times, Our Lady tells Mother Mariana that in the 20th Century a terrible chastisement would break out; it would be horrific, the Faith, Sacraments and the Mass would be difficult to find. Morals would fall into terrible decay and we would be without a Prelate to guide us. She was ADAMANT about this. I cannot count the times the phrase "Middle of the 20th Century" is used. When did Our Lady desire that the third secret be revealed? 1960!  1960!  1960! Let that sink in.

I am convinced that the situation in Quito in the 1700s was allowed to occur as it did as a demonstration of what would happen in the "Middle of the 20th Century"! What was this situation?

1) The Franciscans, through the treachery of the enemies of the Holy Rule of the Conceptionists, were removed as the protectors and directors of the Convent. That is, the rightful authority over the Convent was taken away. (Quito!)

2) Because of the removal of the Franciscans, chaos resulted in the Convent and the Foundresses were put into prison while the non-observant nuns ran amuck.

3) The Obedient Nuns in the prison were deprived of the Mass, the Divine Office, the Sacraments and recourse to Authority.

4) Their was a "schism" in the Convent where the non-observant Nuns tried to leave, but Our Lady intervened and stopped them in their tracks. Many of them actually dying from the fright of being rejected by the Queen of Peace.

5) Order would not be re-established in the Convent until the rightful authority, the Franciscans, returned.

What is the situation in the Church and the world since 1958?

1) Through the treachery of the enemies of Holy Mother Church, the Rightful occupants of the See of St. Peter have been removed as protectors and directors of the Faithful.

2) Because of the removal of the True Popes, chaos has resulted and those trying to be obedient to the Doctrine and Discipline of the Church have been forced underground.

3) Those who are underground are for the most part utterly deprived of the Mass, the Divine Office, the Sacraments and recourse to Authority.

4) Schism is everywhere. Chaos is the rule of the day. Everyone is going his own way and anathematising the others.

5) Order will not be re-established until the Rightful Authority returns.

What is the TRUE TITLE of Our Lady? Our Lady of the GREAT EVENT or HAPPY OUTCOME! One could say, Our Lady of the Triumph because at Fatima, she told us that in the end, My Immaculate Heart will triumph.  One of the most famous aspects of the apparitions of Our Lady at Quito was the miraculous statue made by Angels of Our Lady holding the Child Jesus in Her arm. Only slightly less amazing is the fact that original Child Jesus IS MISSING! The statue of Our Lady is the original. The Child Jesus that we see is a replacement because the Child Jesus is missing and NOBODY knows where He is! Does this not symbolise our own days?

Our Lady, then, has asked us to pray, sacrifice, do our daily duty, wear the brown scapular and, at Quito she asks repeatedly that we pray the Little Office of the Blessed Virgin Mary. In my next post, I will explain why I believe she made this request with such vehemence.