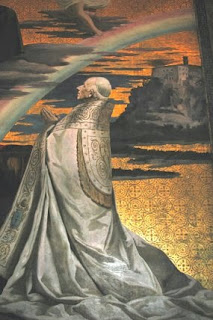 It is reported that Pope Leo XIII had a vision after Mass one day. The details vary somewhat, but what he saw or heard was reminiscent of the scene described in the book of Job where Satan appears before God and asks for permission to attack Job with all he can muster to prove that Job was only holy when things were good. This time, Satan was asking for an increased freedom to attach the Catholic Church and God gave it to him. There is no need to rehash all of the evils that have come upon Holy Mother Church in the ensuing years. Those reading this post are probably aware of it all and that is not the point of this post. What I would like to point out here is that, although Satan was given practically a free hand for a hundred years or so, the Church has not been idle. The popes took up the challenge. Satan had been preparing for this, with God’s permission, but so had Holy Mother Church and in the time that was left, she would continue to prepare us under the guidance of the Popes. For example:

Pope Leo XIII – Prepared us to defend the Faith against the machinations of Freemasonry.

Pope St. Pius X – Prepared us to defend the Faith against the subtle snares of Modernism and ordered the codification of Canon Law so that the faithfull would be able to stay on the straight and narrow path when we were left without a shepherd.

Pope Pius XI – prepared us to defend against the false ecumenism and universalism of the novus ordo sect, especially with his encyclical Mortalium Animos.

Pope Pius XII – prepared us to defend the true nature of the Church, the Holy Sacrifice of the Mass, and the primacy of the Pope and his authority.

Pope St. Pius X was perhaps the greatest warrior for Christ shining the light of truth upon the snares of the modernists and opposing them with all of his might. He foresaw even from his very first encyclical


that society is at the present time, more than in any past age, suffering from a terrible and deep-rooted malady which, developing every day and eating into its inmost being, is dragging it to destruction? You understand, Venerable Brethren, what this disease is—apostasy from God… When all this is considered there is good reason to fear lest this great perversity may be as it were a foretaste, and perhaps the beginning of those evils which are reserved for the last days; and that there may be already in the world the ‘Son of Perdition’ Antichrist of whom the Apostle speaks.”

All know that he opposed this malady with all his might. But many are less aware of the importance for our times of one particular act: The ordering of the codification of the Church’s Canon Law. The thousands of Church laws were organized and examined and compiled in a manner that could be referred to with clarity and understanding. The work was completed on May 27th 1917 when Pope Benedict XV promulgated it:

The most provident of mothers, the Church, enriched by Her Divine Founder with all the notes befitting a perfect society, from the very beginning of Her existence, when, obeying the mandate of the Lord, She commenced to teach and govern all nations, undertook to regulate and safeguard the discipline of the clergy and the Christian people by definite laws.

In process of time, however, particularly when She achieved Her freedom and grew greater and more widespread from day to day, She never ceased to develop and unfold the right of making laws, which belongs to Her by Her very constitution. She did this by promulgating numerous and various decrees emanating from the Roman Pontiffs and Ecumenical Councils, as events and times suggested. By means of these laws and precepts, She made wise provision for the government of the clergy and Christian people, and, as history bears witness, wonderfully promoted the welfare of the State and civilization...

Therefore, having invoked the aid of Divine grace, and relying upon the authority of the Blessed Apostles Peter and Paul, of Our own accord and with certain knowledge, and in the fullness of the Apostolic power with which we are invested, by this Our Constitution, which we wish to be valid for all times, We promulgate, decree, and order that the present Code, just as it is compiled, shall have from this time forth the power of law for the Universal Church, and We confide it to your custody and vigilance.

But in order that all concerned may be able to have a thorough knowledge of the regulations of the Code before they begin to be binding, We ordain that they shall not come into effect until Pentecost day next year, i.e., May 19, 1918.

Notwithstanding all contrary regulations, constitutions, privileges, even those worthy of special and individual mention, and notwithstanding contrary customs, even though they be immemorial, or whatever else may run counter to this Constitution.

For no one, therefore, is it lawful willingly to contradict or rashly to disobey in any way this Our constitution, ordination, limitation, suppression or derogation. If anyone should dare to do so, let him know that he will incur the wrath of Almighty God and of the Blessed Apostles Peter and Paul.

Given at Rome, from Saint Peter‘s, on the Feast of Pentecost of the year one thousand nine hundred and seventeen, the third year of Our Pontificate.

During the year of 1916, an Angel whom many believe to have been the very same St. Michael to whom Pope Leo XIII composed his prayer, began appearing to three shepherds in Fatima, Portugal. On May 27th 1917, two weeks to the day after the Blessed Virgin Mary first appeared to the children, the CIC was promulgated! Is this a coincidence? I cannot beleive that to be the case. The Blessed Virgin Mary, the precursor of the second coming of Christ as St. John the Baptist was of His first coming, has been warning us of the coming Apostasy since her appearances to Mother Mariana de Jesus Torres in Quito, Ecuador in the 1600s. She specifically said that it would break out in the middle of the 20th century. She warned us again at La Salette, France, that she could not much longer hold back her Son’s hand and that Rome was about to lose the Faith and become the seat of Antichrist. Now at Fatima she warns us again – just 30 years or so before it was to happen, giving a third secret to Sr. Lucia that was to be revealed not later than 1960. This third secret was NOT revealed by 1960, at least not the text. But some things happened that gave away the essence of the secret:

The real Sr. Lucia was replaced by a fake one. (see here for more information)

Our Lady’s appearance and messages at Garabandal, Spain just after the third secret of Fatima was supposed to have been revealed, and would have been if Sr. Lucy had not “died”. (see here for more information)

The Apostasy, was symbolized by the replacement of the real Lucia with a fake one. The True Church, as we were warned by Our Lady, was to be Eclipsed, replaced, by a false one.

Satan had been preparing for this, with God’s permission, but so had Holy Mother Church and in the time that was left, she would continue to prepare us.

I cannot believe that this was a coincidence, the promulgation of the Code of Canon Law in the very same month as the first apparition of Our Lady to bring the last warning of the ever closer approach of the Great Apostasy. We would have a guide to carry us through the time when The shepherd would be struck and the sheep would be scattered. All the popes have preserved the faith, but especially since Gregory XVI through Pius XII they prepared us to face what Our Lady was warning us about. Nobody can say that we have been left without guidance. As a good father who must leave his family for a time and leaves everything in order so that his family can be safe during his absence, we have not been left without all that is necessary to keep the Faith and Discipline of the Catholic Faith. The sheep have indeed been scattered as Our Lord Himself warned us, and we must remember charity as we deal with each others who might not have the same understanding of the situation as we have. This does not mean we should compromise or dialog with people about the Faith, but that we should treat each other with respect as long as all are trying to learn what the Church teaches and has always taught. We must be on our guard, however, against those who would tell us that we should decide whether we should obey the Church.

Let us today, the feast of St. Monica, the mother of St. Augustine, whose perseverance and prayer are credited with bringing about the conversion of this great Doctor of the Church, ask her to pray for us that we may persevere and pray for the day when Holy Church will be restored more glorious than ever, pulchra ut luna, electa ut sol, terribilis us castrorum acies ordinata!
Posted by Karl Keller at 8:51 AM