Between Scylla and Charybdis Lies the Straight and Narrow Path 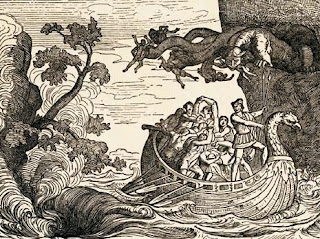 The Encyclopedia Brittanica Online describes Scylla and Charybdis as follows:

in Greek mythology, two immortal and irresistible monsters who beset the narrow waters traversed by the hero Odysseus in his wanderings described in Homer’s Odyssey, Book XII. They were later localized in the Strait of Messina. Scylla was a supernatural female creature, with 12 feet and 6 heads on long, snaky necks, each head having a triple row of sharklike teeth, while her loins were girdled by the heads of baying dogs. From her lair in a cave she devoured whatever ventured within reach, including six of Odysseus’s companions. In Ovid’s Metamorphoses, Books XIII–XIV, she was said to have been originally human in appearance but transformed out of jealousy through the witchcraft of Circe into her fearful shape. She was sometimes identified with the Scylla who betrayed her father, King Nisus of Megara, out of love for Minos, king of Crete.


Charybdis, who lurked under a fig tree a bowshot away on the opposite shore, drank down and belched forth the waters thrice a day and was fatal to shipping. Her character was most likely the personification of a whirlpool. The shipwrecked Odysseus barely escaped her clutches by clinging to a tree until the improvised raft that she swallowed floated to the surface again after many hours. Scylla was often rationalized in antiquity as a rock or reef. Both gave poetic expression to the dangers confronting Greek mariners when they first ventured into the uncharted waters of the western Mediterranean. To be “between Scylla and Charybdis” means to be caught between two equally unpleasant alternatives.

~~~~~~~~~~~~~~~~~~~~~~~~~~~~~~~~~~~~~~~~~~~~~~~~~~~~~~~~~~~~~~~~~~~~~
During the hundred years or so before the Eclipse of the Church began in 1958, the Vicar of Christ began to prepare the faithful for the onslaught they would have to endure when they would be without a shepherd to guide them along the straight and narrow path. By means of encyclicals, bulls, letters, locutions, and every other means at their disposal, the true Popes laid down what would be needed for the Catholics of our days to make it safely through the treacherous waters of the Great Apostasy. Ultimately, providentially, providing us with the codification of Canon Law in 1917, within days of the beginning of Our Lady's apparitions in Fatima where she warned us that the Apostasy was about to begin. Was this a coincidence? Of course not!

This Code of Canon Law provides the Catholic with EVERYTHING he needs to make it safely to the port of heaven. There is no need to understand and interpret Divine Law, Theology, Philosophy, or Ecclesiology in order to remain in safe waters. All one need do is consult the Code of Canon Law and OBEY IT.  In the words of Pope Benedict XV who promulgated it:

The most provident of mothers, the Church, enriched by Her Divine Founder with all the notes befitting a perfect society, from the very beginning of Her existence, when, obeying the mandate of the Lord, She commenced to teach and govern all nations, undertook to regulate and safeguard the discipline of the clergy and the Christian people by definite laws.

In process of time, however, particularly when She achieved Her freedom and grew greater and more widespread from day to day, She never ceased to develop and unfold the right of making laws, which belongs to Her by Her very constitution. She did this by promulgating numerous and various decrees emanating from the Roman Pontiffs and Ecumenical Councils, as events and times suggested. By means of these laws and precepts, She made wise provision for the government of the clergy and Christian people, and, as history bears witness, wonderfully promoted the welfare of the State and civilization...

Therefore, having invoked the aid of Divine grace, and relying upon the authority of the Blessed Apostles Peter and Paul, of Our own accord and with certain knowledge, and in the fullness of the Apostolic power with which we are invested, by this Our Constitution, which we wish to be valid for all times, We promulgate, decree, and order that the present Code, just as it is compiled, shall have from this time forth the power of law for the Universal Church, and We confide it to your custody and vigilance.

But in order that all concerned may be able to have a thorough knowledge of the regulations of the Code before they begin to be binding, We ordain that they shall not come into effect until Pentecost day next year, i.e., May 19, 1918.

Notwithstanding all contrary regulations, constitutions, privileges, even those worthy of special and individual mention, and notwithstanding contrary customs, even though they be immemorial, or whatever else may run counter to this Constitution.

For no one, therefore, is it lawful willingly to contradict or rashly to disobey in any way this Our constitution, ordination, limitation, suppression or derogation. If anyone should dare to do so, let him know that he will incur the wrath of Almighty God and of the Blessed Apostles Peter and Paul.

Given at Rome, from Saint Peter‘s, on the Feast of Pentecost of the year one thousand nine hundred and seventeen, the third year of Our Pontificate.

In the midst of this Apostasy through which the Bark of St. Peter must travel in our times, the faithful are faced with this exact situation: people left and right willingly contradicting and rashly disobeying the law given by the Vicar of Christ, which is to say, GIVEN BY CHRIST HIMSELF. We must stay on the straight and narrow path that leads to salvation. We must avoid the dangers on either side.

Among those who consider themselves Traditional Catholics and who reject the church of Antichrist that poses as the Catholic Church, most have generally veered off to one side or the other, lured by one of two errors that lie just on the edge of the narrow path that lies between them. One of these groups is composed of those who have felt called to "save" the remnant Church by taking it upon themselves to consecrate bishops without papal mandate, thus bringing automatic excommunication upon themselves and upon the men they consecrate. This is clearly laid down in Canon Law and only by a great deal of circumlocution do they convince people that it is acceptable to disobey the clearly defined laws of Holy Mother Church. Please go to this link to read a very thorough explanation of the absolutely clearly defined mind of the Church on the matter:

However, the other group goes to the opposite extreme and denies that any priest has any jurisdiction if he ever said the novus ordo even once and they contradict Canon Law by denying that such priests can have their censures lifted. This view also goes against Canon Law and is equally harmful in that it prevents people from availing themselves of Sacraments and Mass from undoubtedly valid priests who were sent by Holy Mother Church to tend Her flock. Please see my article Canon Law, The Great Apostasy, and the Sacraments for a complete explanation of this.

The result of these two dangerous errors is this: Instead of the faithful seeking out priests who were duped by the novus ordo and might be convinced to return to the True Mass and Faith, we have people with no jurisdiction consecrating and ordaining others with no jurisdiction all of whom calling down automatic excommunication upon themselves according to the explicit Canons mentioned in the article above. If people had sought out true priests and tried to get them to abandon the novus ordo we might have been able to turn the tide of the apostasy and gained the upper hand. Instead we had SSPX, CMRI, SSPV, and who knows how many others bringing about chaos - the precise situation that Pope Pius XII warned would happen if men were to begin consecrating bishops without papal mandate. Do not try to deny that CHAOS is exactly what we have. St. Augustine defined peace as The tranquility of order which is exactly the opposite of what we have on our hands.
But - it is not too late. I urge people to seek out elderly priests who might have expressed some dissatisfaction with Bergolio. This is one thing we can be thankful for - Bergolio is so over the top that anybody of good will is now fed up. Find such priests and tell them about what you know; about the Great Apostasy and the invalid Novus Ordo etc. We must put an end to this chaos. We must realize that a man who was not sent by the Church is a usurper just as much as Roncalli, Montini, Luciani, Wojtyla, Ratzinger and Bergolio.

If you are dying, you are permitted to ask such jurisdiction-less priests for absolution. Otherwise, they should be avoided in terms of the Sacraments. Find a priest who WAS sent and try to bring him back.

In the meantime, we must stay on the straight and narrow path and avoid the monsters on either side if we want to arrive safely at the port of heaven. May Our Lady, Help of Christians, see us safely there!
Posted by Karl Keller at 12:45 PM