Fr. Campbell's Sermon: The Way of Truth Maligned (hammering Zionism as an enemy of the Church) 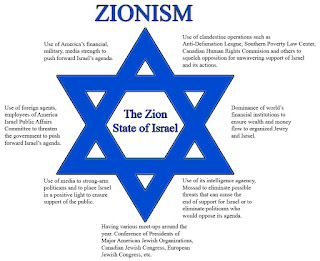 (NB: The diagram above is my addition. It is NOT part of Fr. Campbell's sermon.)

Looking into the future with a prophetic eye, St. Peter, the first Bishop of Rome, and our first pope, warns us against “lying teachers” and “destructive sects”:

“Among you there will be lying teachers who will bring in destructive sects. They even disown the Lord who bought them, thus bringing upon themselves swift destruction. And many will follow their wanton conduct, and because of them the way of truth will be maligned. And out of greed they will with deceitful words use you for their gain. Their condemnation, passed of old, is not made void, and their destruction does not slumber” (2Pet.2:1-3).

St. Paul describes in strong language, some of which I do not include here, the sinful state of those who have abandoned the true faith and the worship of God:

“And so they are without excuse, seeing that, although they knew God, they did not glorify him as God or give thanks, but became vain in their reasonings, and their senseless minds have been darkened… And as they have resolved against possessing the knowledge of God, God has given them up to a reprobate sense, so that they do what is not fitting, being filled with all iniquity, malice, immorality, avarice, wickedness; being full of envy, murder, contention, deceit, malignity; being whisperers, detractors, hateful to God, irreverent, proud, haughty, plotters of evil; disobedient to parents, foolish, dissolute, without affection, without fidelity, without mercy. Although they have known the ordinance of God, they have not understood that those who practice such things are deserving of death. And not only do they do these things, but they applaud others doing them” (Rom.1:21;28-32).

You don’t have to say a lot to be a false prophet. You can do it with one picture. Just ask Bruce Jenner, now known as Caitlyn. We are being programmed to accept situations like Jenner’s as the “new normal”. For years we have been exposed to gross moral depravity by the TV and the other media. We watch at the peril of falling into mortal sin, which is worse than any plague. Anthrax, Aids, or Ebola, can kill the body, but can’t touch the soul. Mortal sin means death to both body and soul in Hell for all eternity, unless by God’s grace one is able to repent. Those who don’t fight courageously become blind to the truth, and fall into the grievous errors of the corrupt society around them.

False prophets abound. Think of the “lying teachers” and “destructive sects” created by the Scofield Bible. Seeking to alter the Christian view of Zionism (the re-establishment of Jewish sovereignty in the land of Israel), the Jewish Zionists have succeeded brilliantly by promoting a pro-Zionist subculture within Christianity. They commissioned Cyrus Scofield (1843-1921) to re-write the King James Version of the Bible by inserting Zionist-friendly notes in the margins, between verses and chapters, and on the bottoms of the pages. The Scofield Bible (1909) became the standard for interpreting scripture in Protestant churches, seminaries, and Bible study groups. And they all followed like sheep, including the famous TV evangelists of our time, Billy Graham, Hal Lindsay, Pat Robertson, John Hagee, Joel Osteen and their like. And they in their turn, with their enormous following, have led the whole country into vassalage to the Godless modern State of Israel. Deceived themselves, they have become “lying teachers”. How the Jewish Zionists must gloat over their mind-boggling achievement.

St. Paul in his Epistle to the Galatians contradicts the claims of the Scofield Bible:

This makes it clear that to carry the blood of Abraham in one’s veins, or to be a believing Jew, is of no advantage to those who do not have faith in Christ. And Scofield and the Oxford University Press are liars when they try to prove that those who are known today as “Jews” are the heirs to the promises of Abraham. The Jewish religion today is not the true religion of the Jews of the time of Christ, but the false Talmudic Judaism which blasphemes Jesus Christ and deifies the Jewish race. The promises God made to Abraham are fulfilled in Jesus Christ.

The Jewish Zionists, in the dark themselves, have no interest in promoting a true understanding of the Scriptures. And who would have thought that the “Bible believing Christians” would have stumbled after them into the darkness? Amazing as it seems, those pompous TV evangelists with so much to say, have strayed far from the truth which they think they have found in the pages of the Holy Bible. They should take note of St. Peter’s warning (concerning St. Paul’s letters) that “there are certain things difficult to understand, which the unlearned and the unstable distort, just as they do the rest of the Scriptures also, to their own destruction” (2Pet.3:16).

Standing up in Jerusalem on the First Pentecost, St. Peter spoke to the Jews of the “promise” given to Abraham, which is fulfilled in Jesus Christ:

“‘Repent and be baptized every one of you in the name of Jesus Christ for the forgiveness of your sins; and you will receive the gift of the Holy Spirit. For to you is the promise and to your children and to all who are far off, even to all whom the Lord our God calls to himself.’ And with very many other words he bore witness, and exhorted them, saying, ‘Save yourselves from this perverse generation’” (Acts2:38-40).

St. Paul tells us of the true children of Abraham:

“Know therefore that the men of faith are the real sons of Abraham. And the Scripture, foreseeing that God would justify the Gentiles by faith, announced to Abraham beforehand, ‘In thee shall all the nations be blessed.’ Therefore the men of faith shall be blessed with faithful Abraham” (Gal.3:7-9).
Posted by Karl Keller at 6:49 AM