Miraculous Survival of the Pope - Prophecy of Marie-Julie Jahenny

The following nearly brings me to tears.

It is my translation from French, so make sure to verify anything that does not seem right. 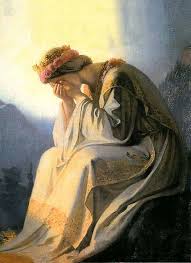 Marie-Julie, stigmatized, bore on her breast a stigmatic inscription written by the Blessed Virgin
“Deliverance of the Holy Father, triumph of the Holy Church.”

The august Pontiff must also suffer all kinds of torments. Will you not raise your voices in supplication for the one who is in chains surrounded by enemies? His irons will be much heavier than those of the august victim who has died. (it is Pius IX). They will desire his death since they want the ruin of the Catholic Church.” (September 29, 1879)

The Church will have a vacant See for many months… (…) There will be two successive anti/popes who will reign all that time on the Holy See….” (September 29, 1882)

Pray for the Sovereign Pontif. Despite the fury of the unbelievers, in spite of everything, he will triumph, they will never have his life…” (January 9, 1874)

His life will be forcefully threatened and, if he is not martyred by the hand of the barbarians, it is because God will perform for him a brilliant miracle. Never has any other pope been threatened by such a tempest! He is already a martyr before suffering martyrdom, he suffers before the hour has come, but he offers his person and the blood of his veins for all of his executioners and for those who are terribly trying to kill him. What the exiles will have to suffer. (September 29, 1878)

Punishments, tortures, contempt, he will receive everything, he will even be lead to the rock of the first Pontiff, and he will be told, “Renounce your Faith, Let us be free”. But his faith will be firm and constant. I am the one who will give you this pontiff. Pray for him who must see before his eyes a relentless revolution! Until death, his hand will hold the Cross and will not let go. Pray, I beg you, pray! Faith and religion will be trampled under the feet of these evil-doers. (March 1878)

The Church will be deprived of her Head who governs her now. The remains of the present Pontiff must disappear. His footprints at the Holy Altar will be reduced to ashes by the flames of hell. The Head of the Church will be outrageously outraged. (July 7, 1880)

The Church, in a veiled sigh, echoes the sound of her dying voice at the gates of my broken soul. The supreme pontiff utters an agonizing speech towards his people, towards the children of whom he is the father. It is as a sword through my soul. I see all of this in my mystical sun. Oh! How I suffer! (November 4, 1880).

The Church will no longer have her voice, which today still speaks loudly. The bond of Faith [The Pope] will soon be driven into exile, the bitterness of a long and painful martyrdom. Seized with anguish, he will live, so to speak, no longer in his person, he will offer everything for his children, for his flock, and for his infallible Church. (January 11, 1881)

At the foot of a mountain, I see, something like a solitary prison, where an old man with white hair and resplendent features is locked up. He bears a Cross on his chest. Jesus receives him and kisses him. He dries his tears and says to him, “For a long time you have carried the Cross, but soon, I will restore to you all of your rights and your freedom! (September 18, 1877) 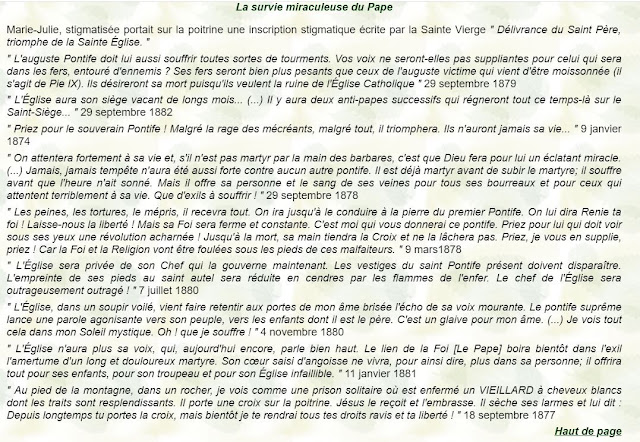